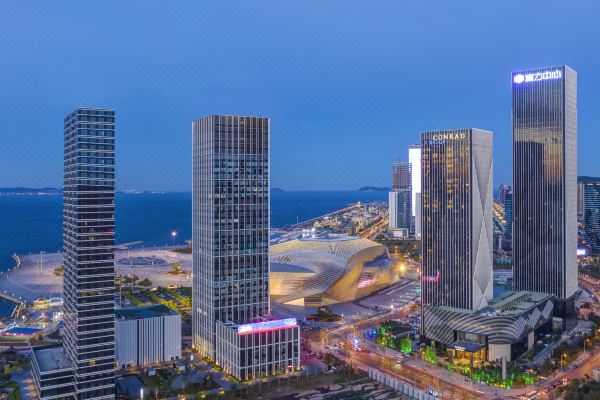 Conrad Dalian, city’s first smart luxury hotel, is located in the heart of Donggang District and close to downtown shopping center and other popular attractions. Conrad Dalian is also home to high profile celebrities, multi-national corporate executives as it has been chosen as the official hotel for the World Economic Forum’s Summer Davos. Conrad Dalian features 210 spacious and modern-luxury guestrooms, located on 28th floor above, with most of them overlooking the city’s famous harbor. At a minimum of 48 sq.m., the standard guest room features a comfortable working area equipped for international travelers, complimentary wireless internet access and a 55-inch LED television. 90 Executive Rooms and Suites provide exclusive access to the 38th floor Executive Lounge, where the guests can enjoy breakfast and “happy hour” apertivo with breathtaking oceanic view. Conrad Dalian will delight the sophisticated palates with a signature restaurant and a bar where the guests could either choose to enjoy upscale gourmet or simply explore the misery of mixology. Conrad Dalian is ready to host premium MICE events, weddings and various stylish social events. The smart gym and swimming pool allow guests to maintain their own fitness regimes while feeling refreshed and revitalized. Conrad Dalian promises an inspiring and personalized experience that perfectly matches the expectations of business and leisure guests. Guests with free time for fun can take a refreshing swim at the indoor swimming pool or make full use of the fitness facilities.

Important City Info
As prevention measures against COVID-19 may have been taken in this region, please contact the hotel to check local travel policies before booking.

There is a maximum of 1 extra bed or 1 extra crib per room.

Children aged under 18 years old must be accompanied by a legal guardian. Children can stay for free when sharing existing beds with adults. Surcharges will apply if extra beds are needed. Children 1.4 m and under can enjoy the buffet accompanied by at least 1 adult.