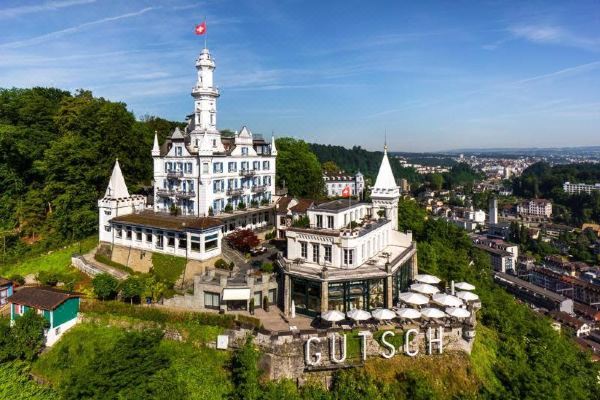 Chateau Gütsch is set in a 19th-century castle, overlooking the town of Lucerne and Lake Lucerne, with views to the Rigi Mountain. The interior was renovated and designed by Martyn Lawrence Bullard. Free WiFi access is available. All rooms feature a flat-screen TV cable, a free minibar, and a bathroom with a bath or shower and a hairdryer. The on-site restaurant offers Mediterranean and regional cuisine. In summer, guests can enjoy their meals with panoramic views on the restaurant's terrace. A wide range of selected wines and cocktails are available at the bar. Chateau Gütsch features a 24-hour front desk, a tour desk, and luggage storage. Free private parking is possible on site. The hotel is 1.4 km from the Chapel Bridge, 1.5 km from Lucerne Station, and 1.7 km from the Lion Monument. Zurich Airport is 49 km away.

For each room, 1 child 5 years old and under can use existing beds.

Breakfast
Parking
Pets
Pets are permitted. Charges may apply.
Paying at the Hotel