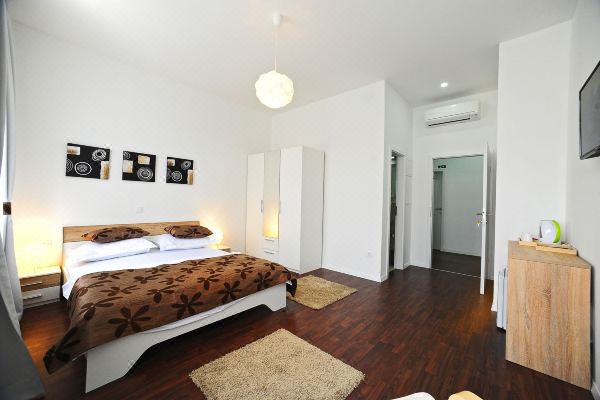 Property Location When you stay at Valenti Rooms in Split, you'll be near the beach and minutes from Archaeological Museum and Church of Our Lady of the Bell Tower. This 4-star guesthouse is within close proximity of Croatian National Theater and Gallery of Fine Arts. Rooms Make yourself at home in one of the 5 air-conditioned rooms featuring refrigerators and flat-screen televisions. Complimentary wireless Internet access keeps you connected, and cable programming is available for your entertainment. Private bathrooms with showers feature complimentary toiletries and hair dryers. Conveniences include desks and electric kettles, and housekeeping is provided daily. Amenities Enjoy recreation amenities such as bicycles to rent or take in the view from a terrace. This guesthouse also features complimentary wireless Internet access and concierge services. Dining Buffet breakfasts are available daily for a fee. Business, Other Amenities Featured amenities include dry cleaning/laundry services, multilingual staff, and luggage storage. A roundtrip airport shuttle is provided for a surcharge (available 24 hours), and free self parking is available onsite.

Front Desk Not Open 24-Hours
24-hour front desk service is not available at this hotel.
Check-in and Check-out Times
Check-in: from 14:00 to 20:00. Check-out: from 09:00 to 14:00. Please ensure you check in within the designated times.
Important City Info
The hotel does not accept children under 18 years of age staying alone.