River2014
Changle
Duxiuyuan
If you are an attraction in Anhuis Anqings Duxiu Park, it is definitely a particularly unpopular attraction. Duoxiu Park is Chen Duxiu's cemetery. It is located in the northern suburb of Anqing City. The traffic is not very convenient. The bus from the urban area to Duxiu Garden has only 4 classes a day.
Chen Duxiu is an Anhui Anqing person, can be said to be the most controversial figure in modern China. Born in Anqing in 1879, he took a test at the age of 17 and later went to Zhejiang to study at the college and went to Japan to study. In 1916, he was the head of the liberal arts at Peking University.
Chen Duxiu's life was quite rough. He died in Chongqing in 1942. In 1947, his coffin was buried in Ye Jiachong of Anqing, which is today's solo garden. The stone archway book "Democracy, Science" is Chen Duxiu's thought.
Chen Duxiu in his youth, dressed in a suit and holding a book, is full of enthusiasm. He is the initiator of the New Culture Movement and the greatest enlightenment thinker of modern times.
Chen Duxiu founded the "Youth Magazine" in 1915, later renamed "New Youth", launched a new cultural movement, advocated science, democracy and new literature, and became a position to promote advanced ideas in that era.
There is a square pond in front of the cemetery. The pool water is clear and calm, meaning that Chen Duxiu is innocent and honest.
Chen Duxiu's tomb is the combination of Chen Duxiu and his original wife Gao Xiaotong.
newyearstravel
Posted: Dec 19, 2018
Related Moments 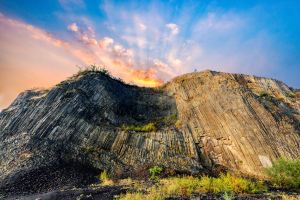 Qiaoguangu Crater
Shandong Changle Volcano National Geological Park, a large ancient volcanic group.
This is the sapphire-rich volcano in Changle,
During the Neogene period between 19 million and 4 million years ago, the
Changle Basin produced spectacular volcanic eruptions,
Zeng Dozens of volcanoes have been sprayed one after another, ##
constitutes a magnificent picture of Wan Jian Qi Fa, Qi Chonghan, and shocking mountains.
The volcano was gradually ablated by the influence of late crustal movement. The volcanic columnar joint formed by
is clearly visible.
decembertravel
Momo_Li