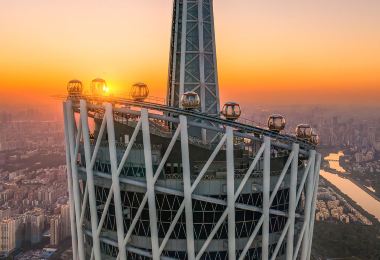 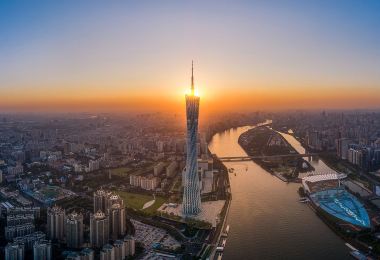 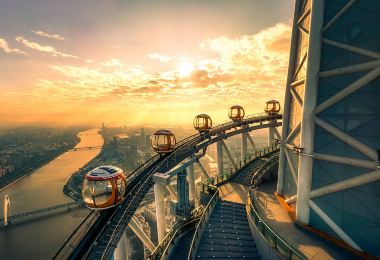 "Last night, the fog in Guangzhou, the sky overlooking the whole city in the rain and smoke in the different temperament and charm, Guangzhou Tower is unique in it, let people shine a lot, Guangzhou Central landmark building"

Reasons to Recommend: Canton Tower is currently one of the tallest towers in China. Due to its unique shape, it is also known as "Slim Waist" and is a landmark of Guangzhou. The tower has a stunning nightview and it is one of the main venues for the Guangzhou International Light Festival each year. At the observation platform, you are offered a bird's eye view of the entire Guangzhou skyline. The tower is a frequent host to high altitude extreme sports programmes. 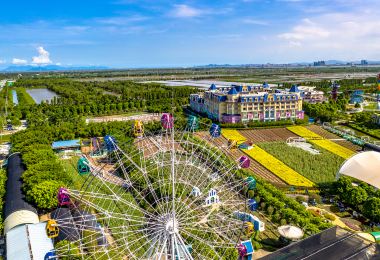 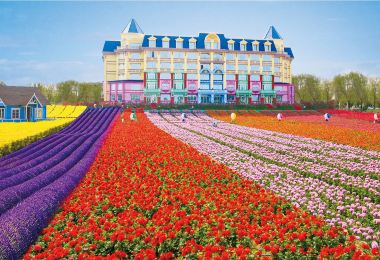 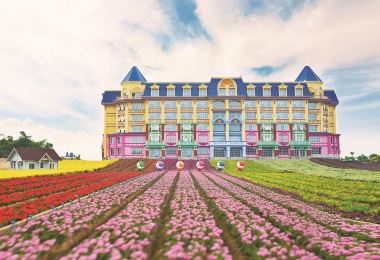 "Remember not to look at sunflower seeds for intensive phobia! It is very suitable for punching cards, because it is really beautiful, the wedding dress is definitely worth the ticket price, flowers are a variety of flowers, let you live in the world of flowers, is a little more bugs, remember to bring mosquitoes afraid of water!"

Reasons to Recommend: Located in Nansha, the Million Sunflower Garden is located some distance away from Guangzhou city and is a great place for flower viewing and family fun. There are many kinds of flowers in the gardens. In every season, there are flowers in bloom. For example, there is the sunflower garden, the rose garden, the lavender garden, the tea garden and so on. The colorful castle-style buildings are very beautiful, and there are many rides and small animals. The thing most worth seeing in the Sunflower Garden, of course, is of course the multitude of sunflowers. This place is also famous for its sunflower chickens. These are chickens that are fed on sunflower seeds. Their meat is firm and their fragrance is exceptionally sweet. 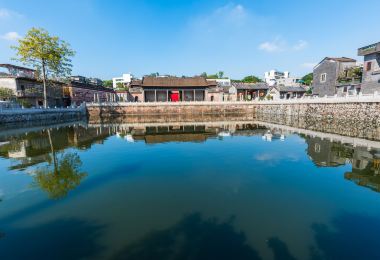 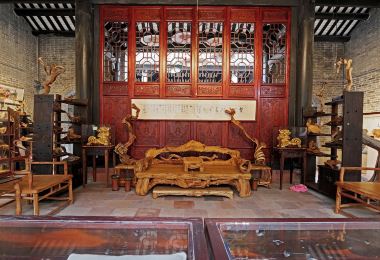 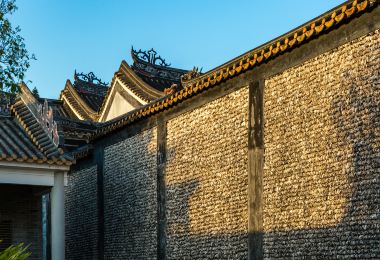 "The ancient town was built in the Southern Song Dynasty. It is an ancient town with 800 years of history and rich historical and cultural resources. He was awarded the honorary title of the town of Chinese folk art, the famous town of Chinese history and culture, the famous town of Chinese orchids, the national civilization town, the national health town and so on. In June 2017, he was awarded the national AAAA level tourist scenic spot. Trip.com buys tickets for 30 yuan, mainly visiting 7 small fee-paying attractions, free into the town, there are many ancient Ming and Qing buildings in the town, among which "Liu Gengtang" is a national key cultural relics."

Reasons to Recommend: Shawan Ancient Town was built in the Song Dynasty and is a perfectly preserved by part of Panyu district. The town has a number of ancient buildings from the Ming and Qing Dynasties and the Chinese Republican eras, al of which fully represent the Lingnan style. The clam shell walls and ear houses are all characteristic of the style, while Cheong Street has been inhabited by famous families throughout history. It is a perfect destination no matter what your interest. There are several famous, impressively designed, ancient ancestral halls in this ancient town. Of course, there is no lack of special snacks available in Shawan, not the least of which is the specialty Jiangmainai. 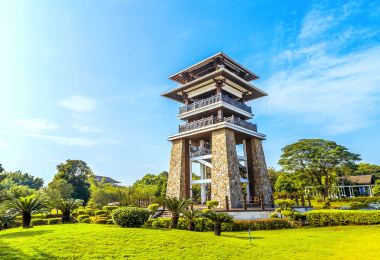 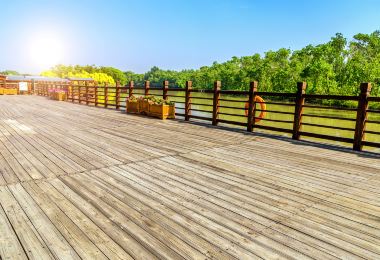 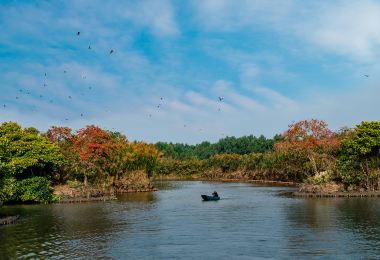 "There is a parking space at the door is very convenient, and it feels comfortable from the entrance, it is nothing! Come and breathe the air, such a park, can be free! The charge is too expensive! This place is really suitable for all kinds of people to play and experience it."

Reasons to Recommend: The Nansha Wetland is located in the Nansha District at the southern end of Guangzhou, far from the polluted air of the city itself. The wetlands are home to flocks of migratory birds, large lotus ponds, reeds and gorgeous scenery. The main attractions of the Nansha Wetland include seascape gardens, mangroves, reeds, plank walkways, and lotus ponds. Guests can choose to tour by boat, on foot, or by bicycle. Taking a tour by boat offers a gorgeous view of the wetlands landscape, which is a paradise for birds, with its mangroves and seas of reeds. A tour by bus, bicycle, or on foot allows visitors to see such scenic locations as the Huaiyin Greenway, Seaview Promenade and Wilderness Walkway. 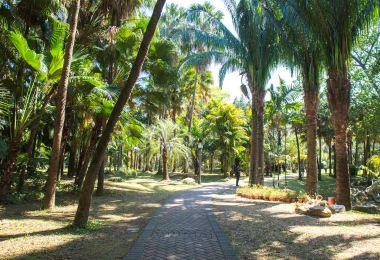 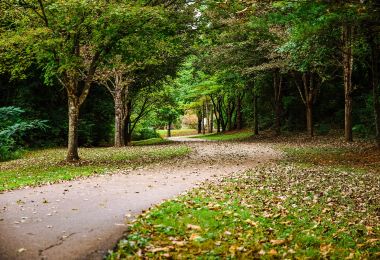 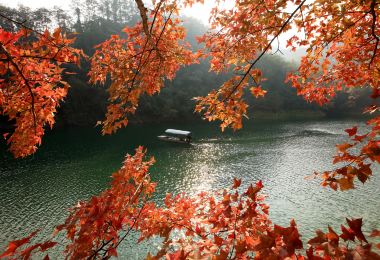 "Subway Line 6 A exit is directly accessible, Trip.com has a discount to buy tickets, there are tropical rainforest museum, alpine botanical museum, desert museum, tropical museum should be the best managed, recently opened a hotel."

Reasons to Recommend: The Chinese Academy of Sciences Huanan Botanical Garden is one of China's great botanical gardens and covers a huge area filled with several rare species of plant. It is a spectacular destination for family tours. There are ten viewing areas in the park, including the Azalea Garden, Ginger Park, Bamboo Park, and Aquatic Park. These plants have existed on Earth for over 100 million years, and remain largely unchanged even to this day. Because of the abundance of plant life, the air is clean and pure. 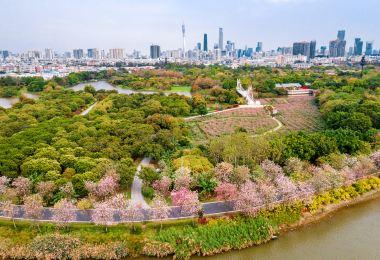 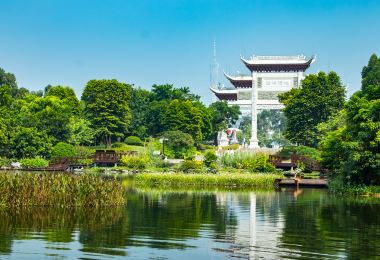 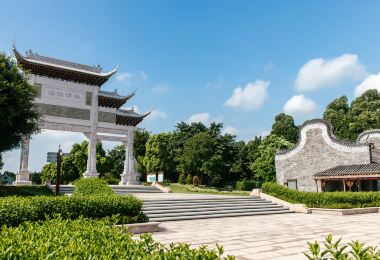 "it was such a lovely garden to spend the afternoon, many blooming flowers and so many good spots to take beautiful pictures and just enjoy a brisk walk"

Reasons to Recommend: Haizhu Wetlands Park is located in the Southeast of the Haizhu region and is a rare example of urban wetlands. The park is divided into three major areas. The Haizhu Lake section is combined with a water conservancy project. The first phase of the wetlands is a combination of wetland scenery and Lingnan waterside town culture with characteristic Lingnan arches and ear houses. The second stage focuses on the original wetland ecology, creating a bird paradise on the foundation of the original orchard. 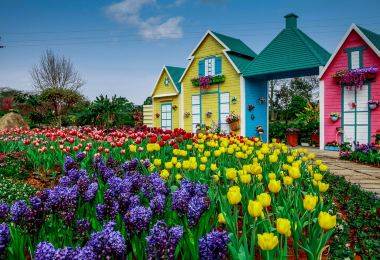 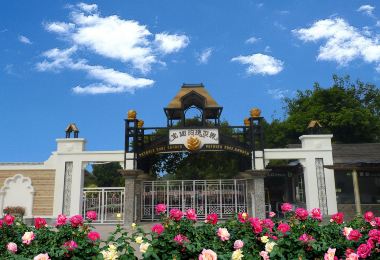 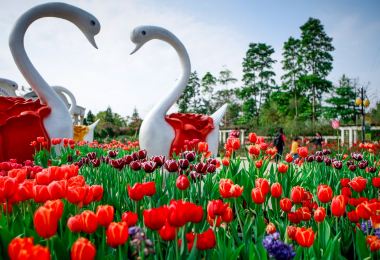 "Going to see the cherry garden in the morning, a little disappointed, going to the rose garden in the afternoon is a bit unexpected, there are quite a lot of flowers, not many people. The place is not big, mainly roses, there are food and drink at the exit resting place, and there is free tea supply. Good"

Reasons to Recommend: Baoqu Rose World is located in Xihe Village just off of Chengjiao Street in Guangzhou's Conghua District. It is the first rose culture theme park in China. The entire park has more than 300 rose varieties ranging from large red roses to pink-edged creamy yellow Aubade roses. There is no shortage of Pink Eden roses or peach-colored blossoms of this gorgeous flower. Every year in April and May the entire park becomes a rioting flourish of color and natural perfume. Countless first time visitors linger in awe and many previous visitors come back time and time again. There are also fresh fruits and vegetables available to try at the newly developed Baoqu Manor Farm.

Popular Types of Attractions in Guangzhou

Guangzhou Travel Guide: Plan Your Travel To Guangzhou  |  A Guide to the World's Top-10 Zoos  |  Hot Spring is the Perfect Match of Autumn, Let's Take a Hot Spring in Guangzhou  |  Chimelong Safari Park Guide: Facts and Useful Information  |  We Also Recommended You Try The Charming Guangzhou Snack Bar  |  8 Must-See Genuine Cantonese-Style Breakfast Teashop of Guangzhou  |  10 Traditional Establishments for Classic Cantonese Foods  |  With Tens of Thousands of Visitors, Just Why is this Internet Celebrity Street So Popular?  |  10 Best Attractions in Guangzhou  |  Top 20 Cantonese Cuisine in Guangzhou  |  What You Must Know before Visiting Chimelong Paradise Guangzhou  |  Ultimate Practical Tips for Canton Tower