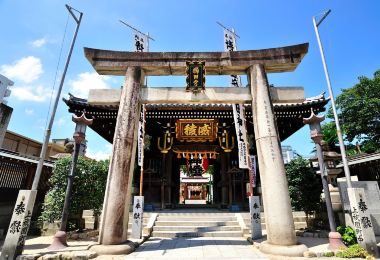 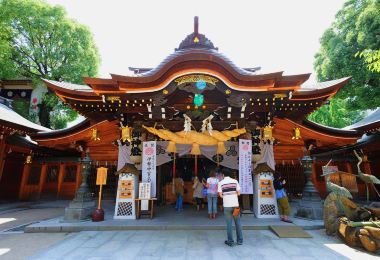 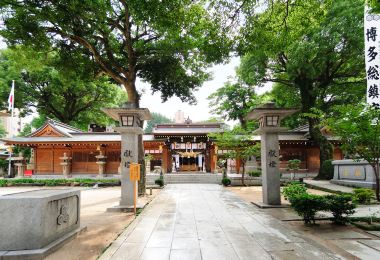 "It is a historical shrine in Fukuoka. It is famous for the festival of Hakata Yamagasa. There is always a decorative Yamagasa exhibit and there is a view."

Reasons to Recommend: Located in Fukuoka city, Kushida Shrine is regarded as the most important shrine in the area. Every summer, the shrine hosts the Yamakasa Gion Matsuri, the biggest festival in Fukuoka, attracting people from far and wide. On the last day of the festival, 26 individuals take part in a race where they carry giant floats through the streets in a spectacular display. 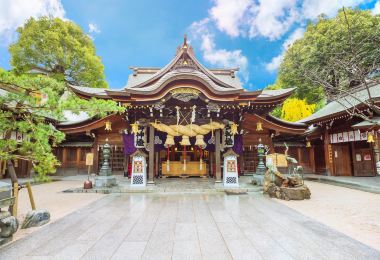 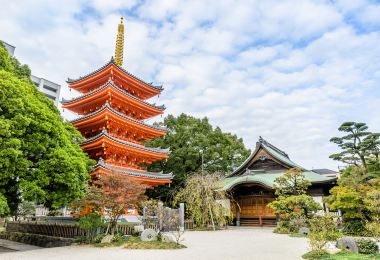 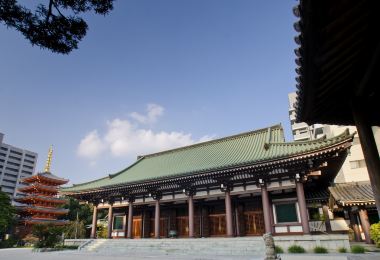 "The main temple of the Kyushu Kyoto Regiment of the Shingon sect, the mountain name is Mt. Nanzan. Masao was always Kobo Daishi (Kumi). According to legends in the temple, Kobo Daishi, who returned from the Tang Dynasty, prayed for Esoteric Esotericism to gradually become East. The temple created as a master of Koho is the oldest in Japan. It was originally located on the seaside. The second Lord of Fukuoka domain • Kuroda moved it to the place where it is now. The cemetery is dedicated to the second generation • Zhongzhi, the third generation • Light, and the eighth generation • Zhigao's tomb, which became the Bodhisattva Temple of the Kuroda family, and the 300-stone monastery, which has a total of 15 million tsubo m of mountain forest. It is also designated as a historical site in Fukuoka. The treasured thousand-handed Guanyin bodhisattva in the temple is a masterpiece of the Heian period, carved by a pine. It looks like a small statue of 87 centimeters tall, but it is full of a heavy quality Buddha, designated as a national treasure in the Meiji period."

Reasons to Recommend: Tochoji Temple is located in Hakata District, Fukuoka. It is the main temple of the Kyushu Sect of Shingon Sect. The mountain name is Nanyue Mountain, and the Zhengzun is Kobo Daishi. It is a historical site designated by Fukuoka City. According to legend, in the first year of Datong (806), Master Kobo built the Tochoji Temple after returning from his studies in the Tang Dynasty. The temple built by Kobo Daishi is relatively old in Japan. It was originally located by the sea, and Kuroda Tadayuki moved it to the current place. The cemetery in the temple houses Tadashi Kuroda, Mitsuyuki Kuroda, the third-generation lord, and Jitaka Kuroda, the eighth-generation lord, who became the family temple of the Kuroda family. On the 28th of the first lunar month, the "Chufu", the "Jieshukai" in February, and the "Zhengyuying Offering" in March, many people come to ask for worship. The Thousand-handed Avalokitesvara Bodhisattva preserved in the temple is a work of the Heian period. It was carved from a single Arhat pine tree. Although it is only 87 cm high, it is full of historical weight and was designated as a national treasure in the Meiji period. Rokkakudo is a Buddhist hall that is outstanding in terms of form and function, and is a building designated by Fukuoka City. In the 13th year of Tenpo (1842), he lived in Hakata's Bungoya Eizo (Manzai Lou Souhiko) and raised funds from merchants in the west of Nagoya to recruit Ito Heizaemon, a Nagoya master craftsman, to build the almsgiving. On the hexagonal kitchen door in the middle, there are still paintings and calligraphy drawn by literati and writers at that time. The sculpture of the Great Buddha of Fukuoka began in Showa 63 (1988), and it was finally completed after four years. It is 10.8 meters high and weighs 30 tons. There are 7 or 13 Buddha statues carved on the 16.1-meter-high light back, and 5,000 small Buddha statues are also enshrined on the back wall. Next to it is the Treasure Exhibition Hall. 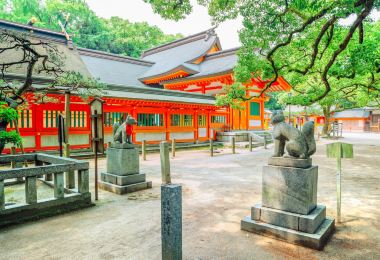 "It is ichinomiya in Chikuzen province. You can visit it on foot from Hakata Station. When you enter the shrine from Sumiyoshi Dori street, you will feel like entering from the side rather than Omotesando, but suddenly you come out to the shrine office in front of the main hall. On holidays, there are also Japanese confectionery sales in Hakata, and it is a vibrant shrine."

Reasons to Recommend: This shrine is dedicated to the gods of Sokotsutsuo-no-kami, Nakatsutsuo-no-kami and Uwatsutsuo-no-kami and it was officially designated in ancient time as one of the high ranked shrines. It was once admired as the greatest shrine of Chikuzen area (northern part of the present Fukuoka prefecture). The surrounding area was originally a cape at the mouth of Nakagawa River flowing into Hakata Bay. It was worshipped as a tutelary shrine of navigation. The gods were also worshipped as gods of Japanese poem (waka) and ancient famous poet Sogi visited this shrine to pay respect to the god. The straight shaped roof of the main hall of this shrine is one of the specific features of ancient architectural style, very contrastive to the later Buddhist style. The main hall is designated as a national treasure and the copper axe and sword of the shrine are designated as important cultural properties of the prefecture. 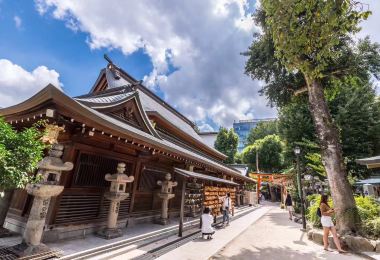 "This temple is quite close to Tocho-ji Temple. Walk for about 10 minutes. There are many towering trees in the temple. It can be seen that the history is very long. There are a lot of green moss inside, and there are a few cats napping on it."

Reasons to Recommend: Shengfuji Temple is located near the garden in Fukuoka Prefecture, Japan. It is an older Zen temple in Japan. In the 6th year of Jianjiu (1195), the mountain was opened by Zen Master Rongxi, the source of the seven bases of the Duke of Lai Chao. The temple houses the statue of the Sixth Patriarch Dajian and other important cultural relics. The temple has a wide area, and the mountain gate, Buddhist hall, main hall, and bell tower are all historical relics. In addition, there are many temples and shrines around the temple, so the place where it is located is called "Teramachi", which is a quiet place. 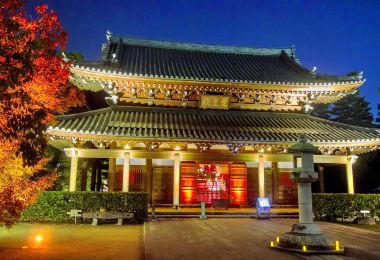 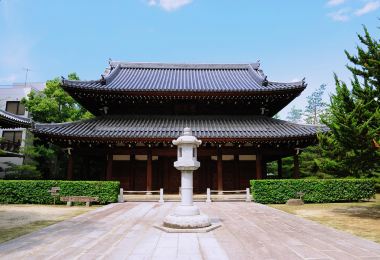 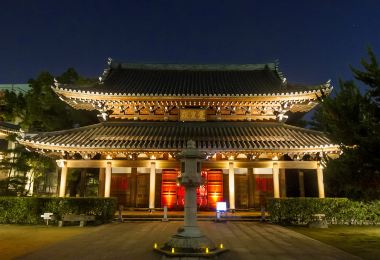 "On business trips, the appointment time is relatively late, so after breakfast, I wandered around the hotel. In the morning, it had just been raining for 30 minutes, so the air was clean and moist, and I felt very comfortable. As I walked, I saw a very peculiar wooden door in the distance. I walked in and saw the Thousand-Year Gate. A small path directly behind the door felt like a garden. I wandered and found this temple. There is no charge, the door is open, and the courtyard is very ghostly. After walking around for about 5 minutes, you can read it. One of the inner doors is blocked by a notice, which means that it has been opened because there are too many foreign tourists and cultural differences. It had a certain impact on the temple, so it was a pity that the inner courtyard was closed."

Reasons to Recommend: Chengtian Temple is a temple of the Dongfu Temple School of Linji Zong. It was built in the 3rd year of Renzhi (1242). It was built by Xie Guoming, a trader from the Song Dynasty. The mountain name is Wansong Mountain, and the founder of the mountain is Yuan Erbianyuan. Yuan Erbian Yuan, the national teacher of the Holy One, crossed the sea to China in the first year of Jiazheng (1235), and returned to China in the second year of Renzhi (1241). In addition to Buddhist teachings, he also introduced many cultures of the Song Dynasty to Japan, including the practice of udon noodles, soba noodles, yokan and steamed buns. There are precious Japanese cultural heritages in the temple: three statues of Sakyamuni (Kamakura period), a statue of the Sixth Patriarch of Zen (Kamakura period), a bronze bell, in addition to the temple there is also a piece of Manda Yasanyou, who is said to be the founder of Hakata Ori. Monument to the gate, and the bell tower that Hakata merchant Sori Ya bought from Sakurai Shrine and donated to Jotenji in the 2nd year of the extension (1674). 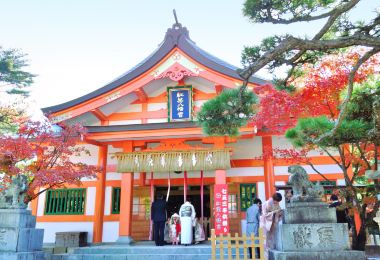 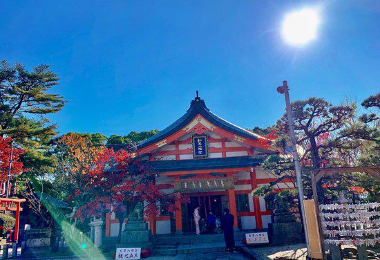 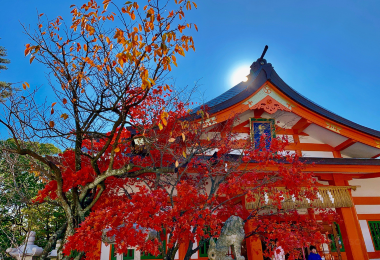 "Koyo Hachimangu Shrine is a general Chinju of Nishi Shin and Fujisaki District on the west side of Fukuoka City, with many followers. The shrine dates back to 1482 years and is now located only in 1913. The shrine is a real attraction, with its lush and beautiful red leaves, which many people visit in the fall. It will hold a red leaves festival on November 23 and 24, when the hall will be projected on the stage and lights at night. About a thousand paper lanterns illuminate the shrine, bringing two special days. Colourful autumn scenery."

Reasons to Recommend: The Autumn Leaves Hachimangu Shrine is located in the Haya Ward of Fukuoka City. The gods enshrined are the Empress Shengong and the Emperor Yingjin. The shrine was founded in August of the sixth year of Kanbun (1666), and the annual festival is on October 11. The shrine includes the main hall, the shrine, the gate of the gods and the ancestral temple. The main hall has a red and white appearance, which is a traditional Japanese shrine architectural style. It is very eye-catching. There is a long stone road in front of the main hall, which is particularly solemn and solemn.

Popular Types of Attractions in Fukuoka