Hedgehog_Slash
Hohenschwangau
Hohenschwangau Castle
Hohenschwangau Castle, also known as Hohenschwangau, is a castle in the village of Hohenschwangau in Schwangau, Bavaria, Germany. It is located across the hill from Neuschwanstein Castle and is adjacent to the city of Fussen.
Gossau Castle is a gem of German Romanticism. It was ushered in its great period after its completion in the 12th century and became the central theme of the court's lyric poetry.
The sun shines on the banks of the Lech River, but the red houses at the foot of the mountain are conspicuous. Standing in front of the ancient church, staring at history.
newyearstravelunforgettableexperiences
Posted: Dec 24, 2018
Related Moments 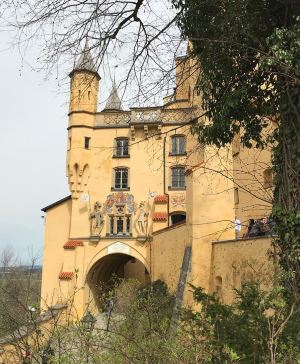 Hohenschwangau Castle
One of the most beautiful and alluring castles in Germany. Highly recommended to visit it during your trip to Fussen and especially to Neuschwanstein Castle. This castle is also lovely although the main highlight is still the Neuschwanstein Castle. This was where King Ludwig 2 spent his childhood. We learnt a little more about his parents and his brother from the castle tour which lasted about 50 mins. #wintergetaway #wintergetaway
wintergetaway
Pondchanit 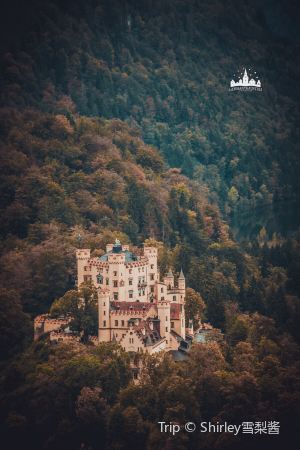 Hohenschwangau Castle
Neuschwanstein Castle, also known as Hohenschwangau Castle, Hohenschwangau Castle or Hohenschwangau Castle, is a castle in the village of Hohenschwangau in Schwangau, Bavaria, Germany. It faces the Neuschwanstein Castle and is adjacent to Fussen. Compared to the dreamy shape of Neuschwanstein, the appearance of Hohenschwangau can only be said to be a simple mini. But like Neuschwanstein, we turned around around it because of the time, and found that it was different from every angle. Coupled with the blue sky, I feel that such a small castle also has its own style. Although there is a charge for the visit to
Gaussberg, its own garden is free, in addition to the view of Neuschwanstein Castle, the Alpine Avenue in the scenic area, and the remote Alp Lake. Saying goodbye to the exquisite small pattern like Rothenburg, the perspective in front of the eyes is suddenly bright, and even the nose is full of the magnificent mountains.
Gaustian Castle is led by a tour guide, each of whom sends an audio guide, and each time a tour guide will play the voice introduction of the area. Although the swan castle has no glamour and dreams like the Neuschwanstein Castle, the collection in the castle is more abundant than the Neuschwanstein Castle. There are 14 rooms in the castle and a large number of rich collections open to visitors. Every piece of furniture is an original used in the past, very rich in life. From there, you can also see the influence of Wagner's opera "Roy Green" on Ludwig II's childhood, and the deep friendship between the two. The museum also has pianos and correspondences that were played by the two people. . After the death of Ludwig's father, Ludwig's main change to the Hohenschwangau was to paint some small stars on the ceiling of his bedroom and let it shine through hidden oil lamps. It was this romantic sentiment that allowed him to build the same romantic Neuschwanstein Castle.
I remembered a sharp statement about the evaluation of the two swan castles: Neuschwanstein outside the strong and dry, the high swan castle Jinyu inside. . .
[Other tips]
1) Neuschwanstein Castle is far from Gothenburg Castle, and it takes more than half an hour to walk purely. If you have a rest meal, it is recommended to leave the interval between the two castles. The official will usually arrange a 2 hour interval
2)
instagramworthydestinations
worldheritage
Shirley Zhu 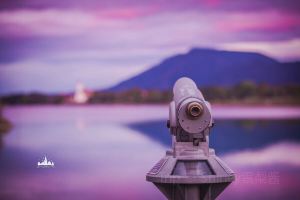 Forggensee Lake
The hidden sights on the edge of Neuschwanstein Castle, the sunset of the large harvest area of Lake Forggen
Forggensee (Forggensee) is a reservoir on the Lech River in Bavaria, Germany, near the town of Fussen. Lake Forggen covers an area of 15.2 square kilometers and is the fifth largest lake in Bavaria. Two-thirds of its area is located in Schwangau. Foregen Lake is currently used for water storage and power generation during the wet season. It will become a dry land after all the water is released in the winter, because it can be completed when the snow in the Alps near the spring begins to melt. Water, but not because of the winter water retention ice, and the melting of snow at the same time to form a flood. Cycling around the lake is also a very popular sport and travel style in the area.
The road to Lake Forggen is a typical country road. There are local houses on both sides of the road. Occasionally there are people who run the dog, but they can still be described as small people. The lawn with the same ground as the football field, and the Alpine dwellings in the "Sissi" movie, a larger back garden than a family, and unopened flowers, we see a big faint The poetic life of the city. The characteristics of the
Fergen Lake are that the underwater is the submerged ancient Roman military road. When the reservoir is released in winter, the avenue is revealed. There are cruise ships on the lake to enjoy the Alps.
Unfortunately, the speed of walking is limited, and we encountered a super beautiful sunset on the way to the lake. When it comes to the real lake, there is only the sunset after the sun sets, but it is beautiful. After the sun sets, the lake is quiet or quiet, and the pink-purple sunset glows the entire lake like a strong oil painting. This is the first lake in this trip, we are deeply attracted by the beauty in front of us, until the twilight is unwilling to leave.
Arrival: From Fssen Train Station, 2 km walk north along Augsburger Str to the lake
ticket price: free walking tour. The cruise ship has the "Fssen", 11 euros. "Ross Howe" is 8 euros.
Opening hours: All day on foot. From June 1st to October 5th, the cruise ship "Fssen" is 3 times a day. "Ross Howe" is 6 times a day.
instagramworthydestinations
beautifulsunsets
Shirley Zhu 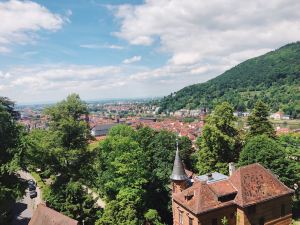 Hohenschwangau Castle
Hohenschwangau Castle, also known as Hohenschwangau, is a castle in the village of Hohenschwangau in Schwangau, Bavaria, Germany. It is located across the hill from Neuschwanstein Castle and is adjacent to the city of Fussen.
Gossau Castle is a gem of German Romanticism. It was ushered in its great period after its completion in the 12th century and became the central theme of the court's lyric poetry.
The sun shines on the banks of the Lech River, but the red houses at the foot of the mountain are conspicuous. Standing in front of the ancient church, staring at history.
newyearstravel
unforgettableexperiences
Hedgehog_Slash 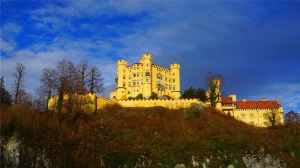 Hohenschwangau Castle
The interior of the Hohenschwangau Castle cannot be photographed, and we are booking the afternoon tour time. It is also good to see the location first. It has been so many days in Germany. It is finally clear today, super happy.

The bright yellow exterior wall is a bright color. Goshen Castle is a gem of German Romanticism. It was ushered in its great period after the completion of the 12th century and became the court lyric poetry. Central theme.

A castle in the village of Hohenschwangau in Schwangau, Bavaria, Germany, across the hill from Neuschwanstein, next to the city of Fussen.

The castle of Gothenburg, a world of fairy tales, was built in accordance with the castle style of England and the Gothic Tudel style.

The father of King Ludwig II was revisited in 1832-1836, and many famous Romantic artists participated in the reconstruction work. The romantic style in Goshen Castle has had a major impact on the character of King Ludwig II. He is said to be very introverted and will not see anyone even when dining.

There are 14 rooms in the castle and a large number of rich collections are open for visitors. Unfortunately, you can't take pictures, but it is also a great way to provide Chinese headphones.