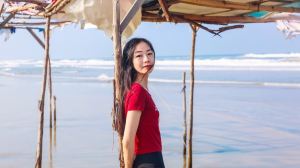 Lang Co Beach
Linggu Beach is also known as the Langu Beach in the LP Vietnam Raiders. There are 10 km of coastline, few tourists, high-end resorts and hotels nearby, and the famous InterContinental Hotel in Da Nang is nearby. The beach is beautiful, and the price is quite extravagant, more than 3,000 a night.

This beach is not a resort, it can be reached directly by bike, and there are almost no tourists. A cute puppy ran over and took photos with me.

This dress is not really for taking pictures. Before coming here, there is no bottom here, and I am not ready to take pictures. I wear a set of clothes at will. For sun protection, I put on black bottoming socks and put on the outside. A thick coat, this is really not hot, because the bike will be cold, no one on the beach, I took a few free shots, I did not expect this clothes to produce a good effect.
newyearstravel
decembertravel
nyedestinations
KRISTINA 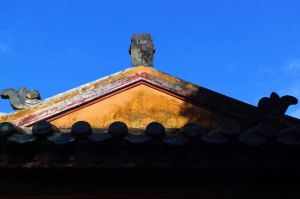 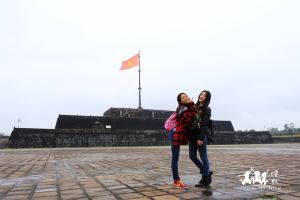 As the ancient capital of Vietnam's three dynasties - Hue, there are many monuments,
which is the most prestigious, I am afraid to count the Hue Imperial City on the banks of the Xiangjiang River.
The construction style here is roughly modeled after the Forbidden City in Beijing,
also incorporates many elements of local characteristics and colonial architecture.
The largest temple in the Taihe Hall, there is a majesty of imperial power, which makes people feel solemn.
Continue to go inside, the gloomy sky, the pattering raindrops,
to express a grief of the imperial city.
Shuttle in the historical cloister, watching the characters in the old photos,
can read the old glory of this ancient city of Hue
Tips:
Tickets: 105,000 rupiah
opening time: 6
ancientlandmark
Pandy 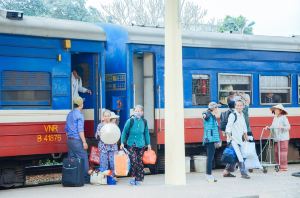 Thành Phố Huế
Hue Railway Station is not the same as the domestic high platform. The station in Hue Railway Station is very short.
Painted train carriage consisting of red, white and blue.
It is reported that this type of locomotive is a diesel locomotive exported by the China South Locomotive Group for the Vietnam Railway. Shortly after the train opened
, the train began to hover along the cliffs along the coast. Due to the very small orbital radius, the speed of the train became very slow.
Look out from the train compartment, next to the cliffs and the sea, this is a rare cool experience in life, you must not miss it when you come to Vietnam.
timetrees 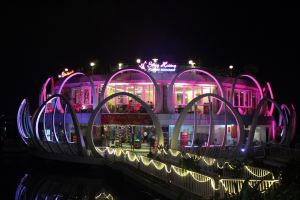 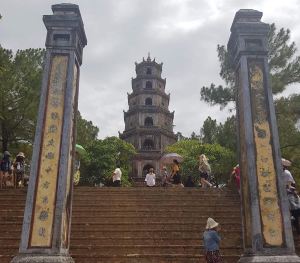 Thien Mu Pagoda
Beautiful location and beautiful grounds and gardens. This is a will positioned location overlooking the Perfume river. Live monk monastery on grounds. This is a very old pagoda and will worth the visit. Some stairs but good for entire family. #wintergetaway #wintergetaway
wintergetaway
Pondchanit 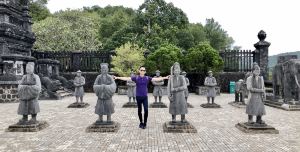 Huế is a small city in central Vietnam. The city is small to explore in 2 days. We visited 3 kings ancient tombs. It was historical and inspirational. Famous temple Thiên Mụ and ancient palace city are also a must to visit. The weather around this season is bearable. Prepare to walk a lot since the tombs and the palace are massive. #huế #centralvietnam #ancientlandmarks #kingstombs #temple #palace #kingdom #adventurous #inspirational
couplestrip
givethanks
worldheritage
historicallandmarks
travelinspiration
E36***86 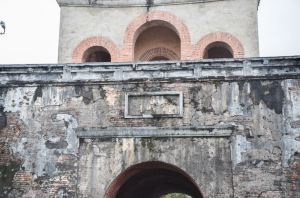 Imperial City
The clear water of Hue is Xiangjiang, which is clear and clear through the ancient city, dividing the ancient city into north and south, and also creating many elegant corners. The Imperial City was built like the Forbidden City in Beijing and was deeply influenced by Chinese aesthetics.
Hue's mountain is the Yuping Mountain where the pine trees are forested. In the morning, it is shrouded in a twilight smog, but when the weather is fine, you can see the sea on the top of the mountain. Rivers, mountains, ancient cities, and gentle people.
coming to Hue without an industrial area is like walking into an ancient picture. Vietnam now has four world cultural heritages. In addition to Halong Bay, Meishan Holy Land, and Hoi An Ancient Temple, Hue Ancient City is one of them. Because it is a cultural heritage, Hue has developed the tourism industry in recent years. There are only 300,000 people in Hue. There are also some travel agencies in the downtown area. In addition to connecting the traffic in Vietnam, it is necessary to arrange tours in Hue City. Convenience. Appreciate Hue, need a mood, and never be nervous.
The easiest way to be free and easy to do is to hire a motorcycle and tell the driver what the price and number of attractions are, so that you can decide when to visit and browse. This way, you can really contact Hue at the closest distance. Usually about 8 US dollars a day, in terms of human relations, should provide the driver's drinking water and lunch, Hue attractions are concentrated, you can slowly appreciate it everywhere.
decembertravel
nyedestinations
timetrees 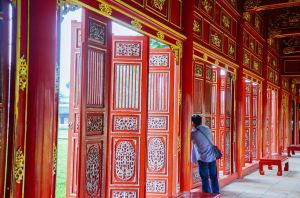 Thành Phố Huế
Hue is a beautiful city. The clear Xiangjiang River passes through the city and divides the city into two areas. The northern part is the old city, and there are also the outer city and the inner city. The outer city is the former capital city, with an area of 8 kilometers. It is surrounded by a moat and the city wall is 6 meters high. There are 24 forts.
There are 4 gates in the south of the city, 3 gates in the east of the city, and 2 gates in the west of the city and the north of the city. Within the outer city is the Forbidden City, with a radius of 2.4 kilometers and a wall height of 6 meters. The Forbidden City is basically modeled after the Forbidden City in Beijing. The main entrance is the Wumen Gate, and the Wumen Gate is the Taihe Hall.
Taihe Hall is the place where the emperor summoned the civil and military officials. It is supported by 80 tall carved dragon and lacquered wood columns. After the Hall of Supreme Harmony is the Qinzheng Temple, and the temples on both sides. The entire Forbidden City palace building is quite spectacular and is the largest and most complete ancient building complex in Vietnam. Outside the South Gate of the Forbidden City, there are Guozijian, Qintianjian, Qiang, Hubu, Liberal, Criminal, and Military Departments, as well as the governor of the Middle, Front, Back, Left, and Right.
decembertravel
timetrees 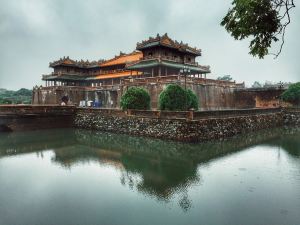 Imperial City
As the ancient capital of Vietnam's three dynasties - Hue, has many popular monuments, among which the most prestigious ones, I am afraid to count the Hue Imperial City on the banks of the Xiangjiang River. The style of construction here is roughly modeled after the Forbidden City in Beijing, and it also incorporates many elements of local character and colonial architecture. In the largest Taihe Hall, there is a majesty of imperial power, which makes people feel solemn. Continue to go in, the gloomy sky, the pattering raindrops, and the grief of the imperial city. Traveling through the cloisters of history, watching the characters in the old photos, you can read the past splendid Tips of this ancient city of Hue. Tickets: 105,000 Vietnamese dong; Opening hours: 6:30-17:30 Time reference: 2 hours
Pandy 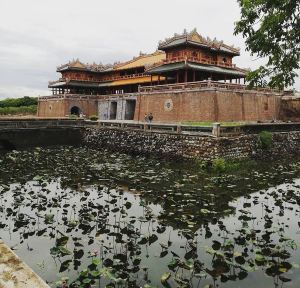 Imperial City
The area is really big and well worth it for the price. As we are always quite interested in history, this was a great place and gave a bit of an insight about the ancient Vietnam. You should certainly plan half a day at least as the area is quite big. #wintergetaway #wintergetaway
wintergetaway
Pondchanit