Palau de la M&_sica Catalana was built from 1905 to 1908 by architects Louis Domenech Montaner (Llu & 7; s Dom & _2; nech Montaner). It is one of the representatives of Catalonian modernist architecture and the only modernist Concert Hall listed by UNESCO as a world cultural heritage. It's hard to imagine such an architectural treasure hidden in a very crowded alley in the old city of Barcelona. The narrow lane in front of the Music Palace can hardly accommodate the next car, even if you use a wide-angle lens to take a full picture of it. I was in a taxi, let the driver bring it, I really can't find it. If you want to enter this magical concert hall, you can only attend 15 visiting groups every day from 10:00 to 15:30 on Monday to Friday. Under the guidance of the official lecturer, you can take the prescribed route to visit the concert hall. There are five kinds of languages to explain, including Catalan, Spanish, French, English and Italian. One kind is to be replaced every half hour, and the most is in English, seven times a day. The fare is 18 euros! Guide Tour is almost every half hour, about one hour per game. It's worth it! Explanations include video introductions, manual explanations and the previously mentioned symphonic clips to appreciate! ___________ The first floor of the concert hall is a cafe. The luxurious atmosphere of the building has been felt by the colored glass windows and the reliefs full of walls. There is no coffee and cake, but it is also satisfied to use the bathroom. The white marble staircase leading to the concert hall upstairs is very elegant, and the golden glass railings and delicate plant relief decorations are interesting. The stone pillars beside the stairs are adorned with stone-carved flowers, which are very vivid and charming. The oval auditorium was originally built to provide a performing base for the Catalan Chorus. The concert hall has two grandstands with 2146 seats. Designer Domenech boldly used the extremely avant-garde glass curtain wall technology at that time. The whole concert hall was bathed in abundant natural light outside. It was the only Concert Hall in Europe that was illuminated by natural light during the day. What attracts people's attention is the huge stained glass inverted dome just above the concert hall. The glass mosaic with inverted bell milk decoration is beautiful, which can be regarded as the finishing touch of the whole concert hall. The large area of glass curtain wall around the hall brings enough light to the concert hall. The brilliant patterns on the curtain wall echo with the glass dome. Behind the stage is a stage background decorated with mosaic tiles and 18 busts of girls holding various instruments. Inspired by Greek mythology, 18 Muses wore different instruments and long skirts. The facial movements and movements are carefully crafted. There are also those roses, flying sculptures and so on. The tour guides explain them one by one. Unfortunately, I really don't like Spanish English. I only understand 40 [%]. If you have a chance, you must listen to a concert here, even if you don't understand Spanish at all. 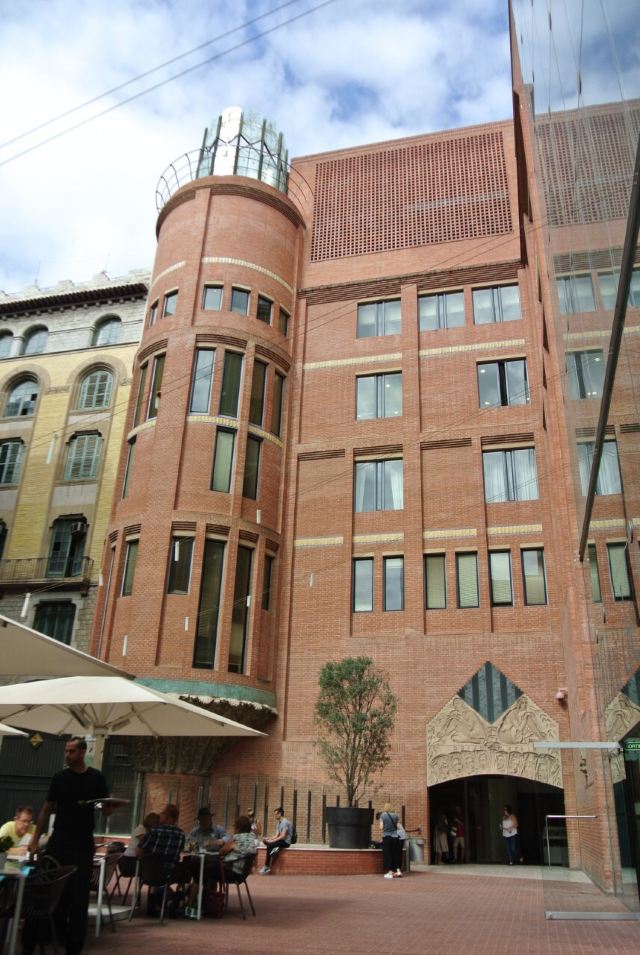 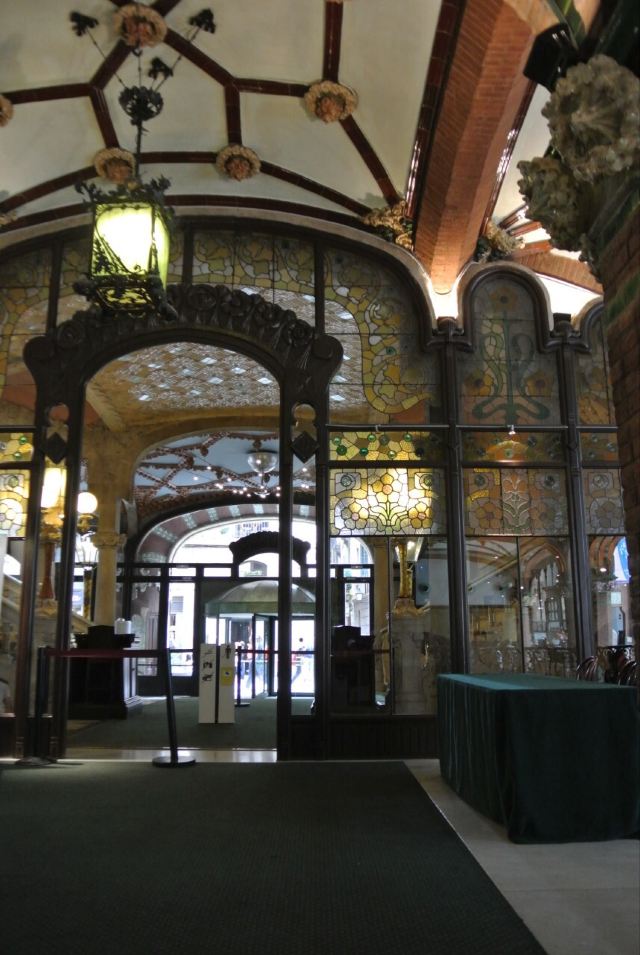 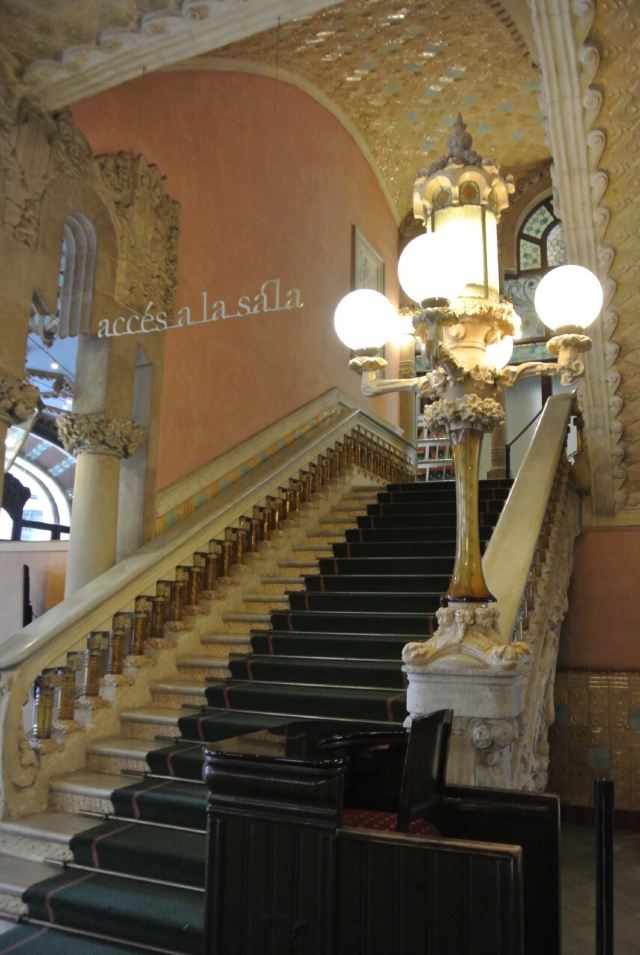 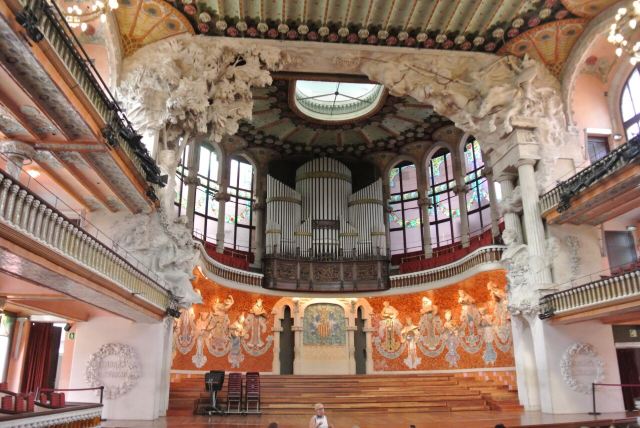 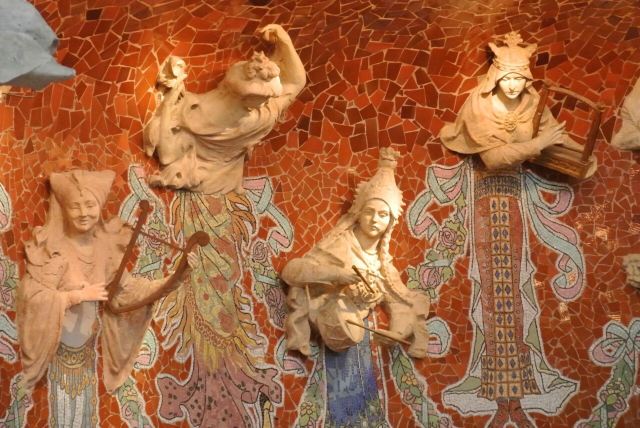 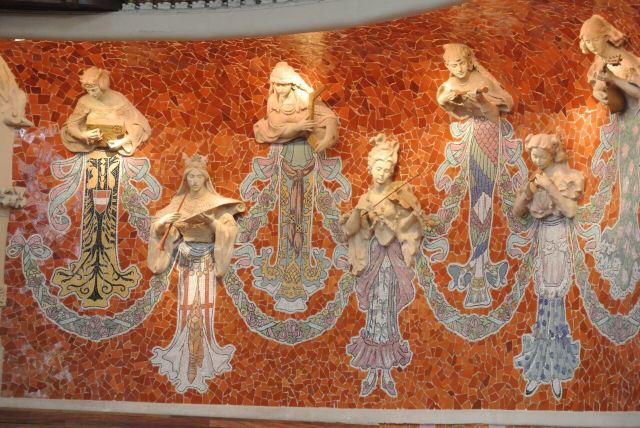 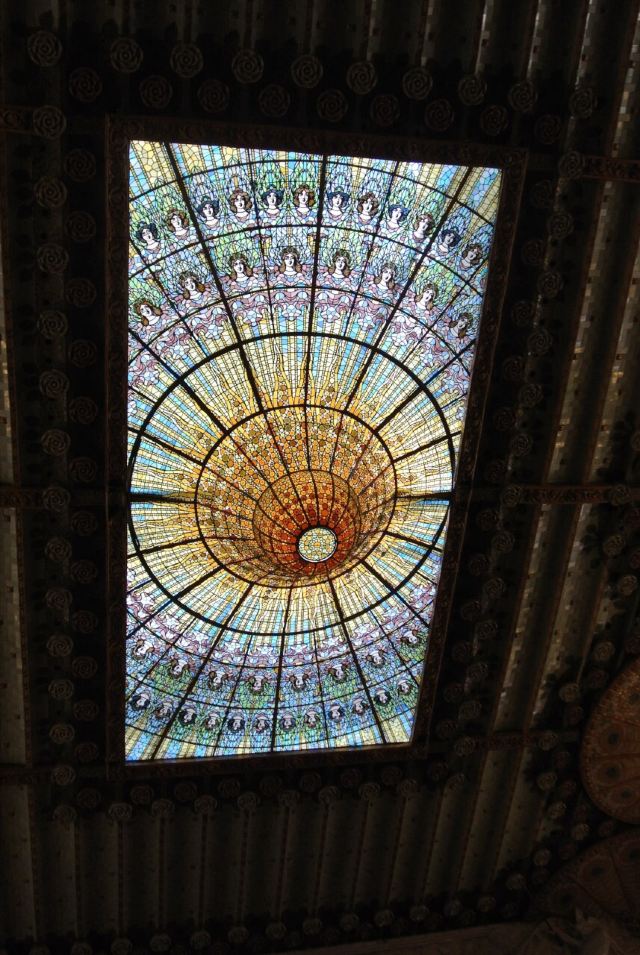 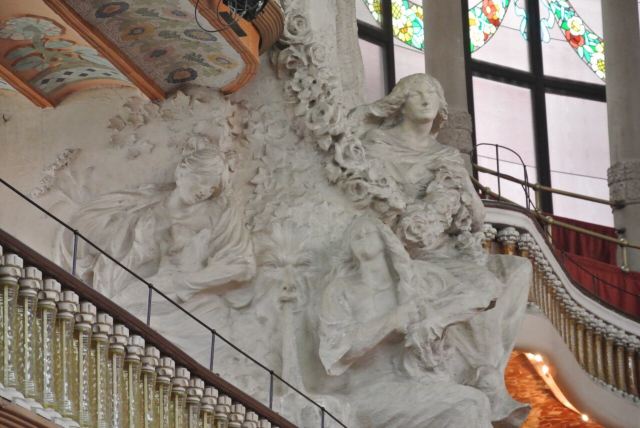 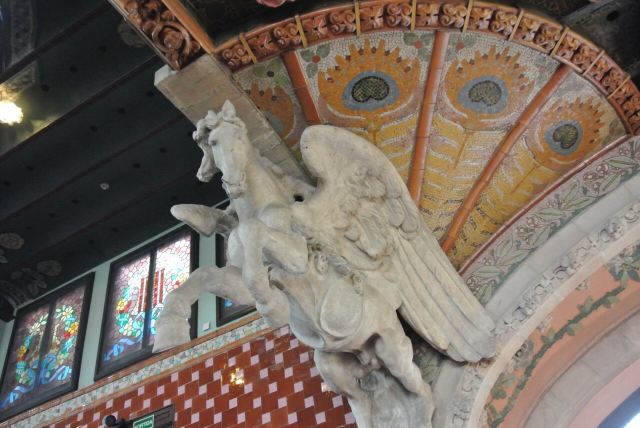 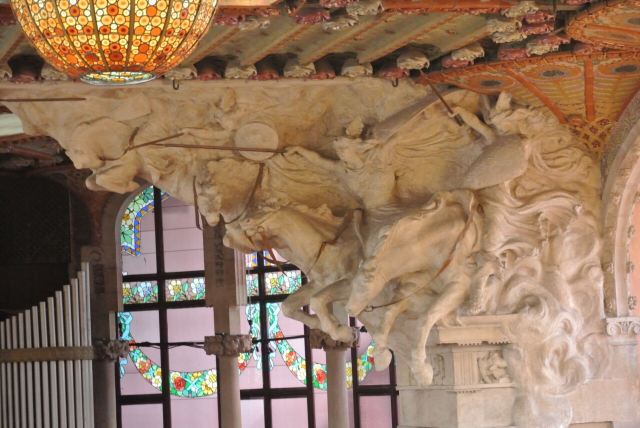 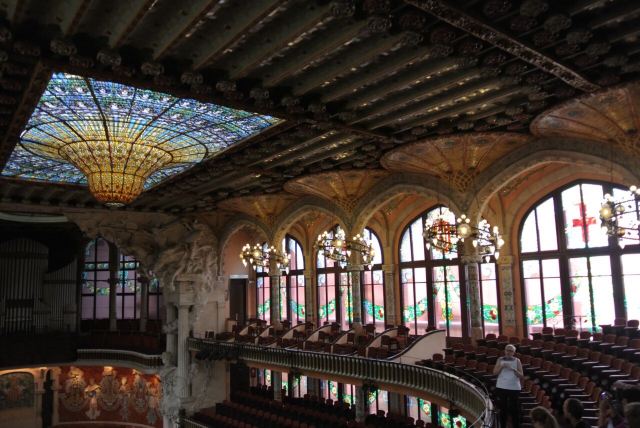 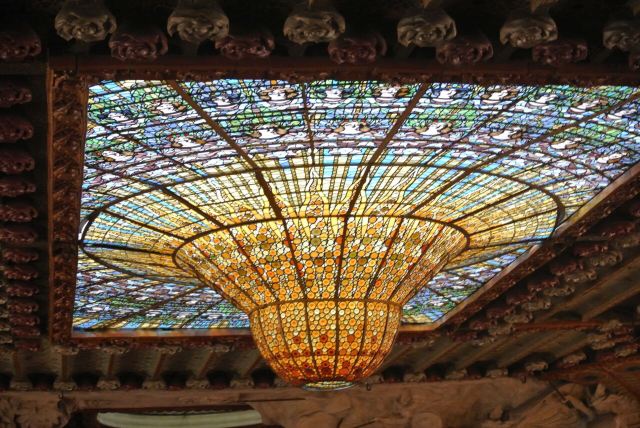 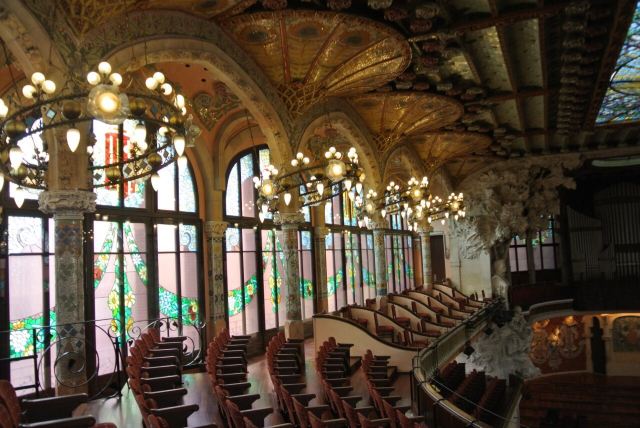 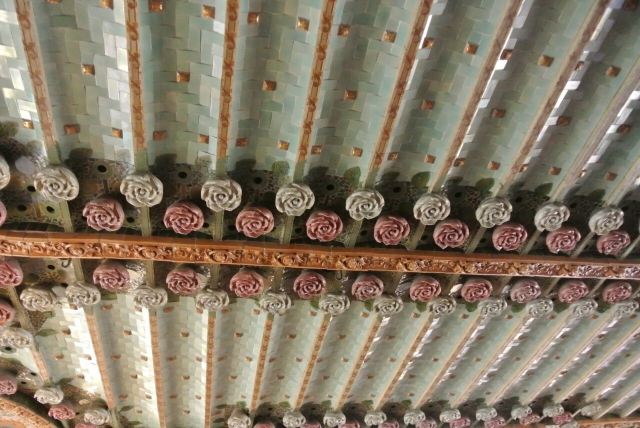 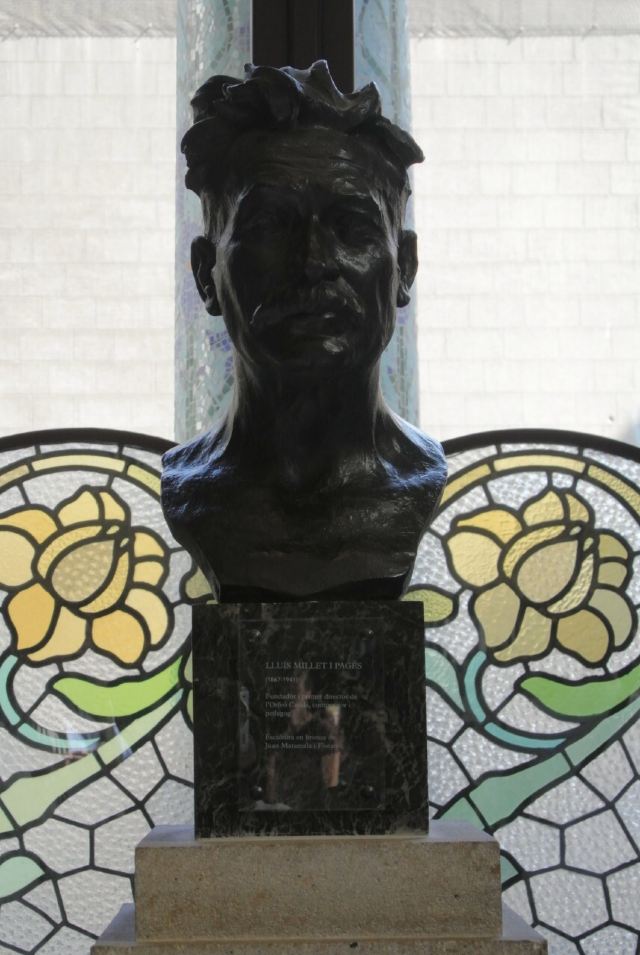 横竖是二温小迪
横竖是二温小迪
5/5
Reviewed on Dec 19, 2016
25
5/5
The concert hall designed by Dominique is known as one of the most exquisite and elegant concert halls in the world. Tickets for the tour are 18 euros. I booked a ticket for 12 Euros on the internet, or a seat in the middle, and I immediately felt profitable. The interior of the Music Palace is magnificent and colorful. A concert with free visits is definitely worth the fare. In the middle of the performance, there is enough rest time to take pictures. I don't recommend Flamingo in the Music Palace. Let's go to Seville to see Flamingo. It's only a small venue that tastes good.
rei1140
rei1140
5/5
Reviewed on Jun 23, 2017
4
5/5
Originally, Barcelona's trip was dedicated to Gaudi, but a small thing led us to change our schedule and come to such a concert hall. On the way to the concert hall, Sari sketched it. It was designed by Louis & Domank. It is the only Concert Hall in Europe that uses natural light. Apart from the super-large stained glass windows on both sides of the stage, the most attractive lighting facility is the huge dome of stained glass, which is inlaid with colorful Angel choirs and geometric figures. Along with the cold tones around it, it gradually moves to the center. The warm tone is excessive, starting from the middle to protrude downwards, forming a natural water drop shape with narrow outside width, as if pushed by sunlight, reflecting the natural light into the hall can illuminate the whole hall. The glass dome is surrounded by golden relief frames and surrounded by large groups of double-color flowers, which weakens the lightness of the glass. You can't imagine if you understand every word. It's more direct to pay for a visit. Although I speak Spanish-style English, it doesn't affect me enjoying at all. It takes about one hour. The lecturer will lead you to visit from bottom to top. First, we will come to Modernist Concert Hall. Here, the audience will watch a 10-minute short film through a projection screen, introducing the design, construction and construction of the Catalonian Concert Hall. Up to completion and so on. In this hour, I just feel that my eyes are really not enough, every detail is too perfect, the lens can not depict her charm and her gorgeousness. The waiting area is actually a coffee bar, which should be specially designed for tourists waiting to visit. After visiting the concert hall, I was surprised to find that the style of this coffee bar and the whole concert hall is completely integrated, although the use is different, but the configuration is the same.
薄雾如纱
薄雾如纱
5/5
Reviewed on Oct 30, 2018
1
5/5
The famous Catalonian Music Palace is situated in a very narrow street with limited space in front of it. It is very difficult to take a full picture of the building. There are exquisite statues on the facade of the building, and all kinds of interpretations are available. I will not go deep into them, just appreciate the beauty of the sculpture. On the first floor, the hall center is a cafe, and the stairway entrance is the entrance to the Music Palace. Entrance tickets for the concert hall are 20 euros, open every day according to the number of performances. There are different performances in English and Spanish. It doesn't matter to people who can only speak Chinese. The first part is the modern multi-functional hall, watching a video, which contains the introduction of the concert hall, as well as the famous musicians who have performed here. Follow the guide into the hall, listen to her passionate tone, skilled knowledge, detailed introduction of the music palace. The most striking thing in the hall is the colorful glass mosaic pendant lamp with Bell and milk, which is gorgeous and dazzling. Next is the stage background relief - Music ladies holding different instruments. The upper part of the fairy is a sculpture, protruding from the wall, very three-dimensional, similar to the Longmen Grottoes in Luoyang. On both sides of the stage are giant statues of musicians Wagner and Beethoven, indicating that music has no boundaries. Looking at the whole theatre from the second floor theatre is a kind of aesthetic enjoyment, unparalleled feeling.
CJ153
CJ153
5/5
Reviewed on Sep 6, 2017
2
5/5
Enjoy a symphony performance at the historic Catalonia Concert Hall! During the period of more than two hours, there were three singers'opera selections, including solo, chorus, male and female chorus of Orchestra Chorus and female chorus of juvenile chorus. After the performance, the audience applauded loudly, and the whole band made five or six curtain calls. The audience was still reluctant to leave for a long time. Finally, the band could only perform one major opening and ending repertoire to express its gratitude to the audience. Even my layman is deeply infected. The literary and artistic atmosphere in Europe is much stronger than that in China.
Show More