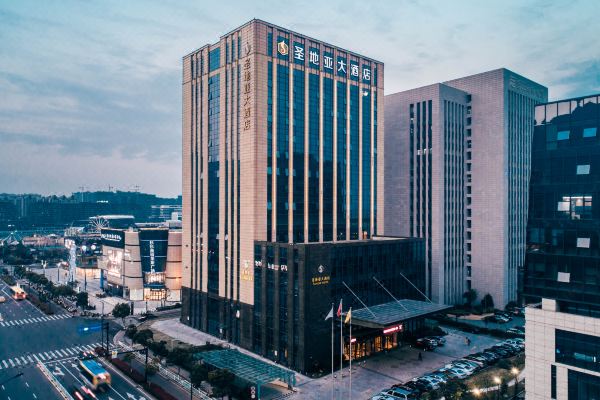 The Sandia Hotel (Shengdiya Dajiudian) is conveniently located 6 km (3.7 mi) from the Zhoushan Putuoshan Airport. Mount Putuo, one of the four sacred mountains in Chinese Buddhism, is about a 10-minute boat ride away. Local attractions such as the Shengsi Islands and Taohua Island are also easily accessible. Free parking and free Wi-Fi in public areas are available to guests. Both Chinese and Western cuisines are served in this Zhoushan hotel. A lobby bar on the premises provides an additional place for meeting friends or relaxing with a drink. A games room and private karaoke rooms are on hand for evening entertainment.

Important
根据舟山市发改委的要求，为了响应政府政策，倡导绿色环保出行理念，自2020.8.1起，酒店不再主动提供六小件一次性日用品，若有需要请致电酒店客房部或前台，我们仍将竭诚为您服务。
Important City Info
普陀山景区宗教活动场所自2020年6月2日起恢复对外开放，游客需持绿码进入景区宗教活动场所，游客须至少提前1天（最多提前15天）在景区官方平台“普陀山”微信公众号进行票务预约，妥善安排游览行程。
All persons traveling to Zhoushan from locations in Mainland China with increased risk of exposure to COVID-19 according to health authorities must, upon arrival in Zhoushan, either: 1) present proof of a negative PCR test result for COVID-19 issued no more than 7 days prior to arrival, or 2) show that their official health QR code status is green and includes proof of a negative PCR test result. Those unable to fulfill either of these requirements must undergo PCR testing upon arrival in Zhoushan. Note: This information is for reference purposes only. Always consult the latest travel restrictions published by government authorities for your destination.
Guests are required to provide valid ID to buy ferry tickets to Mount Putuo. The latest boat to Mount Putuo departs from Shenjiamen at 16:30 and from Zhujiajian at 21:50. This may change depending on the weather conditions. Please pay attention to notifications at each ferry dock.