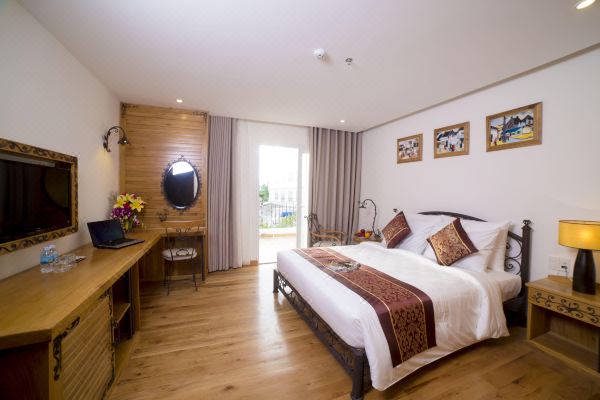 Edele Hotel Nha Trang l is set in the heart of Nha Trang only 400 m away from Nha Trang Beach. It welcomes guests with a beautiful outdoor pool, complimentary WiFi access and a fitness centre. Housed in a contemporary building, Edele Hotel Nha Trang is only 500 m away from Vietnam’s Sailing Center and 2/4 Square. Nha Trang Airport is 27 km away. Stylish rooms come fitted with large windows offering ample natural light. Amenities include air conditioning, a comfortable seating area and a private bathroom with a spray bidet and hairdryer. Rooms overlook panoramic views of the cityscape.Friendly staff at the 24-hour front desk can assist you with luggage storage, travel arrangements and airport shuttle services. Edele Hotel provides guests with a business centre and laundry/dry-cleaning services.Both Asian and international meals can be enjoyed at Edele Restaurant. Guests can also unwind with a glass of wine or refreshing cocktail at the bar.

Important City Info
If a non-Vietnamese male guest is to stay in the same room as a Vietnamese female guest, a valid marriage certificate must be provided when checking in at the hotel. Otherwise, check-in may be refused.